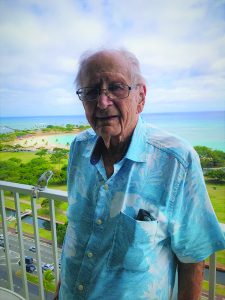 Hawai‘i is fortunate to be the home of many centenarians, and I love writing about them. Most recently, I spent time with Edward Jurkens, who celebrated his 100th birthday on December 23, 2017. We planned to talk at his apartment then go to lunch. On the way there, I thought, “Where should I park so I can drive him somewhere?”

Edward’s memory is so good we chatted about everything, from his college days at Knox College — where he got free tuition as a hurdle and high jump athlete and received his pilot’s license before signing up with the Air Force — to retiring from Hawai‘i’s CINCPAC in July 1968. Since retirement, he has had some fun and not-so-fun jobs, but found his love was in volunteering: for AARP giving driving lessons to seniors for 22 years, 13 years for the Service Core of Retired Executives, and looking after the “petting zoo” at Waikīkī Aquarium. Now, on Mondays, he volunteers at the Pacific Aviation Museum.

He credits his post-retirement longevity to all the walking he did when golfing up through his 90s, walking around Ala Moana and now on the grassy area of his condominium, eating salads, reading a lot, doing Sudoku, and exercising his arms with dumbbells as he watches TV.

For lunch, he walked to and from the restaurant near his condominium, while I scurried to keep up!