A Love for Hawai‘i 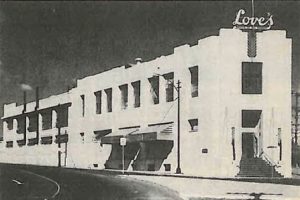 Love’s Bakery has been an important part of Hawai‘i’s history for generations — marking its 165th anniversary this year!

Robert Love, his wife and three sons came to Hawai‘i from Britain and started the Love’s Biscuit & Bread Co. Ltd. in July 1851 on Fort Street Mall.

What a long history of providing baked goods to all of Hawai‘i!

My husband, Clifford, has been working for Love’s for almost 30 years, but Generations’ Editor Katherine Smith has connections with the bakery that go even farther back. Her grandfather, Jack Mailer, immigrated to America from Scotland and worked for Baker Perkins Inc., a company that made heavy industrial machines and equipment. When talking with Katherine, she said that he was a machinist and installer who came to O‘ahu in 1924 to put the baking ovens in Love’s Bakery.

Jack was in Hawai‘i for two years and brought home to New Jersey his love for the islands, which passed down to Katherine and her family.

How fortunate for Generations that Katherine has joined our staff! I always knew that she and I had some kind of connection, and we found it. We both have a love for Hawai‘i—and Love’s Bakery.