“Our bodies —regardless of age — can be transformed.” — Diane Cadinha, Certified Personal Trainer 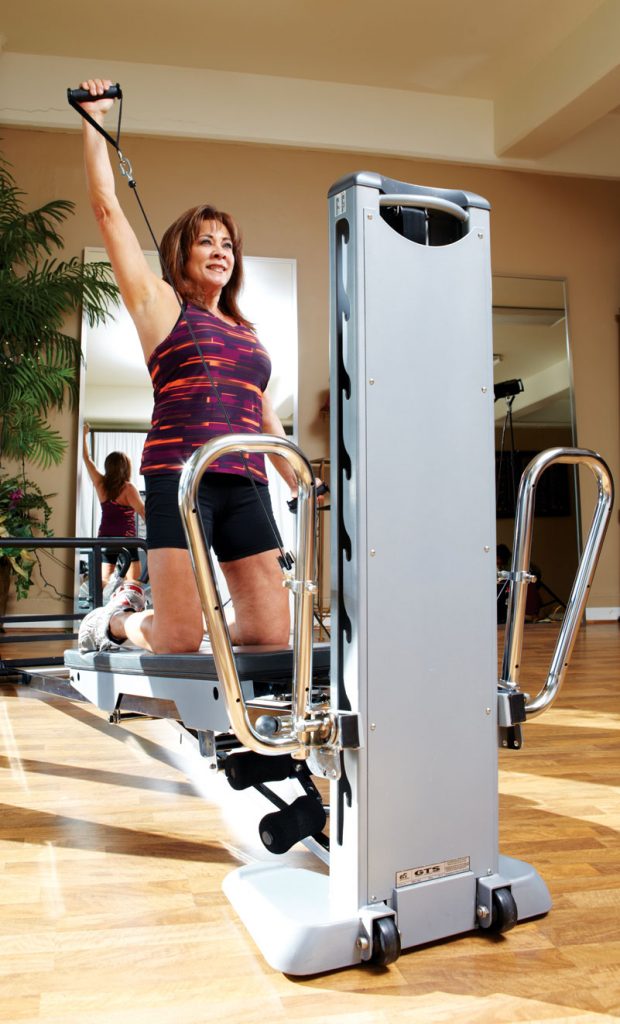 It’s important to recognize that exercise is not merely for sculpting young bodies. It is for everyone — especially seniors, who often have the most to gain. The benefits of senior fitness range from reaching a healthy weight and fighting off disease to better bone health and maintaining an independent lifestyle.

In 1997, certified personal trainer Diane Cadinha worked with her first senior client — Joan Packer, 77. “Watching Joan transform inspired me” Diane says. “It became clear to me how much a person’s quality of life could improve with diet and exercise — regardless of age.”

This started Diane’s passion to specialize in senior health. “Over the years I have seen how exercise, along with proper diet, slows down the aging process. The mind-body connection is big in keeping my seniors mentally sharp, strong and independent,” Diane says. “I learned working with seniors that it’s not over till it’s over.”

Diane’s fitness training also involves eating a healthy diet. She teaches her clients the importance of eating enough fruits and vegetables —5 to 7 servings a day, with 25 to 30 grams of fiber and healthy fats. “With the right fuel in the tank you have the energy to want to workout,” Diane says.

Fifteen years later, Joan continues to make fitness a priority. Now at 91, she inspires others to do the same. Below, we share Joan’s story, along with two other inspirational “strong and silver” seniors. 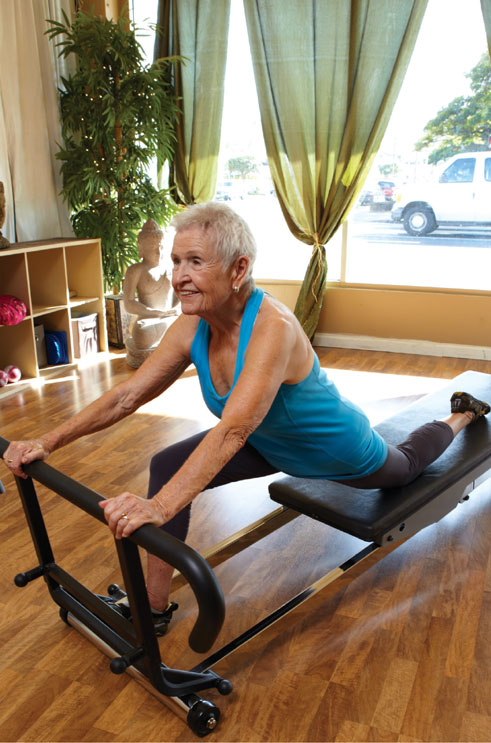 Joan Packer lived a fairly sedentary life in Booneville, Missouri, after retiring as a schoolteacher. When her husband passed away in 1984, she decided to move where her heart always wanted her to be — Hawai‘i. So 20 years ago Joan sold two farms back home and bought a condominium in Waikiki to begin her life anew.

Joan spent her first couple of years of retirement enjoying Hawai‘i. She noticed all the fit bodies walking and exercising at Kapiolani Park, and said to herself, I can do that. So she began a new routine of walking at the park, along with short swims in the warm Hawaiian waters.

As a former smoker Joan realized how much better she was feeling with her new found lifestyle, but she wanted to do more to get in better shape. So she decided to seek out a personal trainer. This is when she met Diane Cadinha and started working out with her twice a week. Fifteen years later, Joan says she feels better than when she was in her 50s.  “I don’t really like to exercise,” she admits.“But I do it for the results. It keeps my body healthy and feeling good.” 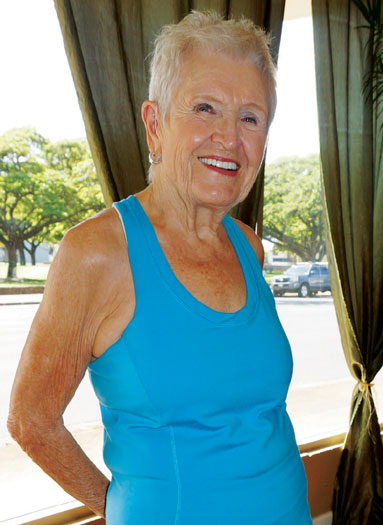 One of her favorite exercises is something that she calls “rewards.” It’s a stretch she does at the end of her workout where she uses a foot strap connected to a cable to stretch her hamstrings.“It just feels so good,” she says, “and it also marks the end of the workout.”

“Tai Chi is my absolute favorite form of exercise … probably because it’s the least strenuous,” she smiles, “but I know that seniors need a mix of exercises… strength exercises for bone health, balance exercises to prevent falls and stretching to stay limber.”

Joan says in her previous life she used to have stiffness and various aches and pains and lacked balance and flexibility. Now, at 91, she has no physical complaints and takes no medication.

Currently, Joan walks the park just about every day, trains with Diane twice a week at her King Street studio, practices Tai Chi almost daily and swims when she can. Joan urges all retirees and seniors to keep a vigorous and healthy lifestyle by exercising every day with friends or a trainer. She does her best to avoid sitting down for more than three hours a day. She also suggests cutting out the sweets and prepared foods, and do your own cooking!

Joan’s two children who live on the Mainland are amazed (and mostly relieved) by their former couch-potato mother. They’re happy to see her as an independent, happy senior who wants stay healthy and enjoy an active retirement. 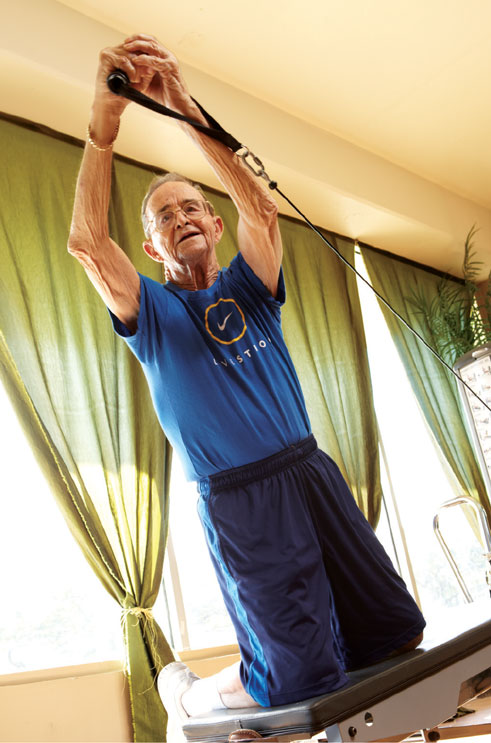 Victor Hawthorne retired at age 57 as an Army Colonel and, in his own words, he was “military healthy” for years while on the job. In his retirement he enjoyed playing golf and baseball and taking international cruises. Then, around the age of 75 he started to experience aches and pains and lose his ability to play his favorite sports. He dismissed it as a part of aging. However, when his balance became an issue, too, he realized he needed to do something about it.

Victor wanted to continue to play golf so he turned to personal trainer Diane Cadinha to keep him in top physical shape. Now 88 years young and just as active as he was in his 60s and 70s, Victor works out with Diane twice a week. 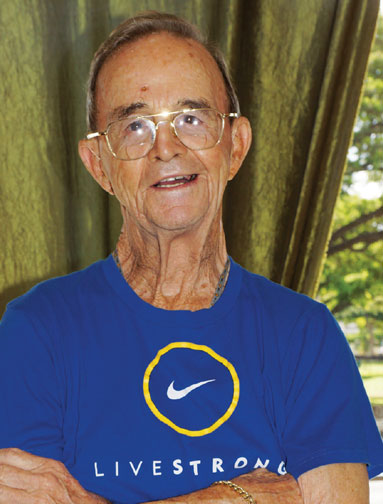 “I like how Diane teaches me the importance of strength and core body training — both very important for balance,” Victor says. “The weekly workouts have improved my balance and strength. I like the way I feel, and like that I can golf again.”

The benefits of working out are endless for Victor who says “don’t give up!” Exercise has improved his posture, and makes him feel strong enough to travel and visit with Mainland family. He has plans to go on a six-month world cruise in early 2013 and says he’ll continue his exercises aboard the cruise ship.

“You’re foolish to not start exercising to maintain your health,” he states energetically.“Do whatever it takes.” 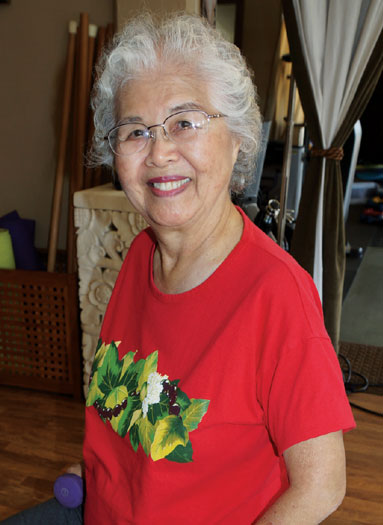 Doris Hara, a retired teacher was enjoying retirement and was active through her 60s. Life was good until her 70s when she began having joint problems and aches and pains. For her ailments, she was prescribed anti-inflammatory medications. She was worried that in the future she’d have to take even stronger medications as her pain worsened.

Then in April of 2012 Doris was reading Generations Magazine and stopped on a photo of a spry Caucasian lady in exercise clothes, flexing her muscles. She was amazed to learn  that the lady, Joan Packer, was 91 years old. Furthermore that she had started exercising when she was 77 years old! What? Doris asked herself. I’m 77! You mean it’s not too late to  start exercising? Doris was so impressed by Joan that she contacted Diane Cadinha for help.

Doris started exercising with Diane in May 2012, and has improved her health and function 100 percent. Previously, Doris had difficulty with everyday activities such as opening doors and jars, getting in and out of the car, and going up and down the stairs. Her biggest concern was getting up and down from the floor. She had completely lost that function.

“When I first came to Diane, I could only last two minutes on the elliptical machine (a stationary exercise machine that simulates walking or running). Now I’m up to 30 minutes,” Doris says. “My strength and balance keep improving. The pain in my wrists and ankles are almost nonexistent. And, yes, I’ve accomplished my biggest goal of getting up and down from the floor.” 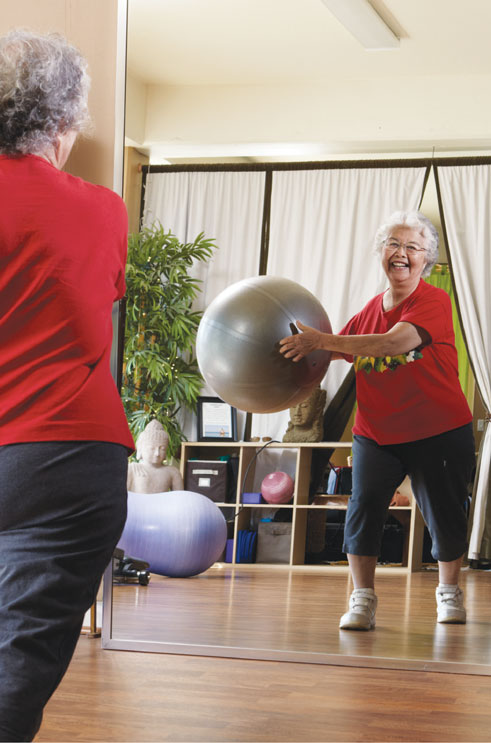 Doris says that when Diane teaches an exercise she explains its health benefits and how it will help in everyday life. “That motivated me to do some of the exercises at home on the days I don’t see her. Also, connecting the movement to the mind empowers me on a daily basis.”

Diane also taught Doris how to incorporate more fruits and vegetables into her diet through “green smoothies. “I make them everyday,” Doris says. “I have so much more energy and peace of mind knowing I’m getting these important vitamins and minerals for my health and well being.”

“You’re never too old to start exercising. I just turned 78! Just get started! I did!”

Exercise is one of the best ways to extend your quality of life. It helps us to maintain our health, function and immune system. Starting in our late 30s we lose about a quarter pound of muscle each year. This causes a chain reaction in our bodies. Our metabolism slows down and we start to gain weight, which can lead to other health issues such heart disease and diabetes. And, lack of exercise can lead to osteoporosis and loss of joint function. Some feel that exercise is too vigorous for seniors. This is not true! It’s more than okay for seniors to workout. Good health is needed for everyday activities such as walking up stairs, shopping and carrying packages.

To stay healthy and independent, four types of exercises are recommended:

*If you are over 50 years old, obese, suffer from an illness or have been inactive, see your doctor before you start a new fitness routine