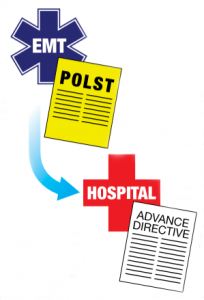 A POLST is a special document in which you say what measures should be used to keep you alive. The acronym stands for — Provider Orders for Life Sustaining Treatment. It’s different from an Advance Directive in that it will be followed by emergency personnel before you reach the hospital, provided that they are aware of its existence.

Emergency medical technicians (EMTs) are required to do whatever they can to restore and stabilize your heartbeat and breathing and take you to an appropriate facility for treatment. They will not read your Advance Directive and try to figure out how it might apply to your situation. But in some cases, resuscitation procedures are not appropriate or wanted.

Almost every state has a version of the POLST, but it is known by other names. In New York it is called a MOLST and in West Virginia it is called a MOST. Veterans Administration medical centers use the term SAPO, which stands for State Authorized Portable Order. Whatever the alphabet soup used to name the document, it generally works as described above.

In Hawai‘i, it’s recommended that you print your POLST on lime green paper so it will be recognizable immediately. The trick is to have your POLST in a conspicuous place in case you need it. You can post a copy near your bed, or you can carry it with you when you leave the house. Just make sure your loved ones know that you have one and where to find it if an emergency occurs.

Note that the POLST does not have to say “don’t resuscitate me.” It can say the exact opposite if that is your wish. Either way, most people do not need a POLST. However, for someone whose death is imminent and who doesn’t want to risk being kept alive artificially against his or her wishes, a POLST is essential.