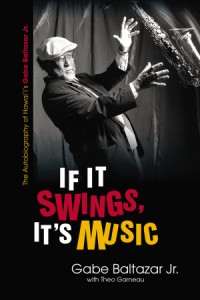 Hawai‘i’s legendary jazz musician Gabe Baltazar, Jr. has thrilled audiences since the late 1940s with his powerful and passionate playing. In his memoir, If It Swings, It’s Music, Gabe takes readers along the long road to becoming one of the very few Asian Americans who has achieved worldwide acclaim as a jazz artist.

Born in Hilo and raised in Kalihi-Palama, Gabe (Gabriel Ruiz Hiroshi Baltazar Jr.) was encouraged by his father, an accomplished musician, to take up the clarinet and saxophone. As a teenager during World War II, Gabe performed with the Royal Hawaiian Band but spent his weekends playing in swing bands. After establishing himself in the West Coast jazz scene, in 1960 he rose to prominence as lead alto saxophonist of the famed Stan Kenton Orchestra. The group recorded more than a dozen albums and won two Grammy Awards.

From 1964 to 1969, Gabe recorded with Dizzy Gillespie, James Moody, Oliver Nelson. He was also a regular in the Los Angeles recording studios, and he filmed with Pat Boone, Phyllis Diller and Glen Campbell. In 1969, Gabe returned to Hawai‘i to work as assistant director for the City and County of Honolulu’s Royal Hawaiian Band, a post he held until 1985. He brought jazz to the public schools and went on to become Hawai‘i’s premier jazz artists. Now 84, he mainly performs informal gigs with friends and family.

Gabe’s memorable encounters with the greatest names in jazz is fond record of days past. (University of Hawai‘i Press, paperback, $24.99)