The Sons & Daughters of the 442nd RCT 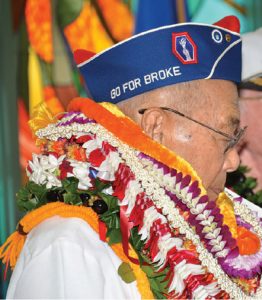 The Sons & Daughters was established in 1993 as a chapter of the 442nd Veterans Club, which is made up of Nisei veterans who fought two battles in World War II.

“We will never forget the dedication, sacrifice and courage of our fathers,” the Sons & Daughers website states. “It is through their accomplishments that we are here today.”

The nation’s highest award for combat valor, the Medal of Honor, was conferred upon 21 members of the 100th Infantry battalion of the 442nd Regimental Combat Team of World War II.

On Oct. 5, 2010, the Congressional Gold Medal was awarded to the 442nd Regimental Combat Team and the 100th Infantry Battalion, as well as the 6,000 Japanese-Americans who served in the Military Intelligence Service during the war.

In 2012, the surviving members of the 442nd RCT were made chevaliers of the French Légion d’Honneur for their actions contributing to the liberation of France during World War II and their heroic rescue of the Lost Battalion outside of Biffontaine, France.

This past year, they assisted at the 73rd annual banquet of the 442nd veterans and began planning for a memorial boulder at the National Memorial Cemetery of the Pacific at Punchbowl. They are now exploring the possibility of reinstating the docent program at Punchbowl and will participate in events this December for the 75th anniversary of the attack on Pearl Harbor.

Regular membership is for all lineal descendants of a World War II soldier of the 442nd RCT and associate membership is available to those who are interested in the 442nd.

“We welcome new members at any time,” said Grace. “It’s a great way to become involved in community activities, remember our veterans and learn about our World War II history.” To learn more, email or call the club.