I was a guest on “Generations Radio,” AM 690, on Nov. 22, 2019 with Lt. John McCarthy of the Financial Crimes Unit of the Honolulu Police Department. The 39-year department veteran is nationally recognized as an expert in financial crimes and elder abuse.

On the show, we discussed how scams go undetected because victims don’t recognize the warning signs of abuse. What follows are danger signals that should prompt further investigation.

ISOLATING THE VICTIM: Abusers don’t want the victim to have a support system and will either try and physically remove the person from a loved one (like a caregiver not letting family members visit the elder) or deceive the victim into thinking that a concerned person is really trying to harm them (like one sibling telling the parent that another sibling wants everything).

SECRECY: A lot of scams involve instructing the victim not to reveal that the transaction/event is occurring. For example, a letter indicating that a senior has won the lottery will instruct the “winner” not to tell anyone about the prize because “there are a lot of scams going on right now.”

URGENCY: Scammers will try to rush victims into making poor decisions. Often, they be make tempting offers, such as, “I have extra building materials and can do some repairs really cheap if you hire me right now.” 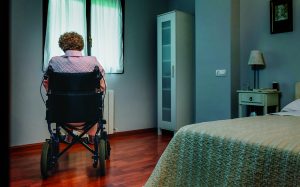 EMERGENCY/TRAGEDY: Scammers will also try to take advantage by forcing victims into making emotional decisions. A good example of this technique is the Grandparent Scam, in which victims receive a frantic call saying a loved one is in dire straits and needs money immediately.

GREEN DOT/MONEYPAK CARDS: Asking victims to purchase a Green Dot/MoneyPak card is a common way criminals transfer money from accounts around the world. Any transaction where money is to be paid using one of these cards should be suspect, including the IRS calling and demanding payment for delinquent taxes.

LONELINESS: The promise of companionship in exchange for money is another form of abuse. Online dating site users asking for a loan or a caregiver accepting generous gifts to stay longer attempt to take advantage of an elder’s loneliness.