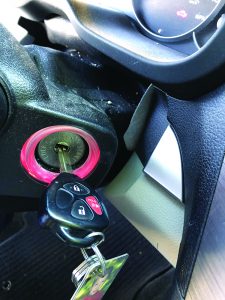 {Play}You would not place a welcome mat outside your car for criminals or hire someone to waive around a sign by your vehicle saying “steal this,” but that is exactly what many drivers do when they leave their keys in their vehicles.

As a prosecutor, no crime gets me more upset than one that could have been easily prevented. It seems like a common occurrence for the police to call me to tell me they arrested a car thief who stole a car with the keys left in it.

Just last month, an elderly gentleman from Waianae had his classic car taken from his garage; in Ewa Beach, a woman had her car taken from a restaurant parking lot; in downtown Honolulu, a law partner had his $100,000 Tesla taken from a parking garage. They had all left keys in the car.

One might think that these drivers got what they deserved and should suffer the consequences of their lapses in judgement, but the crime does not stop with the single stolen car. Over the past months, my office has seen stolen cars used in a series of purse snatchings that have resulted in injuries to elderly victims; stolen cars smashing into storefronts (like Macy’s at Ala Moana) and thefts from big box stores. These crimes most likely would not have occurred if the criminal was forced to use his or her own vehicle that could easily be traced to the owner.

Drivers need to realize that car thieves are lazy losers for the most part. If they feel your car is too difficult to steal, they’ll just give up on your car and go home. Or they might go to another vehicle if that driver left his or her keys in the car (they are seemingly everywhere and easy to find).

If you do have the wherewithal to remove your keys from the car while out and about, another bit of advice would be to not make your keys easily accessible in your garage or home.

Last week, a criminal who was fleeing from the police ran into an open garage, opened the connecting door to the house, and simply reached in and grabbed the car keys. He was able to easily start the car and avoid arrest. We often see car thefts in association with home burglaries, because the keys are easy to find and make carting off stolen items from the house convenient with the victims even supplying the getaway car!

So please take your keys and avoid unnecessary frustration and financial loss. You will also be stopping potential ripple effects, including other crimes that can be committed with your car.