One of the Best Decisions I Ever Made

My wife, May, was diagnosed with breast cancer in 2005 at age 39. In 2015, after being diagnosed with pancreatic cancer, she underwent a Whipple procedure, whereby some of her pancreas, small intestine, stomach and other parts were removed.

We moved to Hilo from Rhode Island, and designed and built our house, a project that began in 2014. After laying out the initial floor plan, May added a sunroom. That was her room — by hers, I mean that was the room she expected her hospital bed to be put into. She knew she was destined for an untimely — and probably unpleasant — death, and she wanted to be able to see the sun and feel the breeze while it happened. If she had to die, it was clear May desperately wanted to do it at home. We moved into our house on Thanksgiving week in 2017. 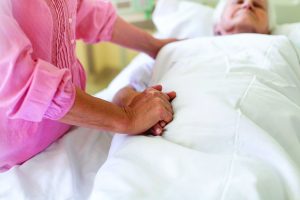 For nearly two months, I helped her walk, eat, drink, medicate, bathe and desperately try to sleep. I wish I knew about hospice early in my wife’s disease progression. You always think — “I don’t need any help, I can handle this.” I didn’t want to admit it, but the fatigue and overwhelm swiftly brought me to my knees.

I finally made the call. May began receiving weekly visits at our home from a hospice nurse. The night of Jan. 22, May woke more than 10 times. I finally admitted to myself that I could no longer go on. When May got up, I told her that I thought it was time to switch to hospice inpatient care. She  immediately agreed — I realized later that she had arrived at that conclusion independently, and she had been waiting for me to arrive at that decision, too. May was essentially free from pain and nausea, and she stayed that way for the next 13 days. I was able to be with her, but also, finally, mercifully, able to get some sleep, too.

In October, for our 20th wedding anniversary, we had been snorkeling off Maui. Less than four months later, on Feb. 3, 2019 — a Sunday — May fell asleep for the last time. She finally left me just before 1am Wednesday while I slept on the sofa in her room.

I have few regrets. However, I wish with all my heart that we had moved her into hospice’s inpatient care earlier than we did. Yes, I was capable of caring for her, but she needed the professional care, facilities and specialized medication only hospice could provide. The people and the facility were magnificent. Hospice care was created to eliminate “terminal suffering.” I wish I understood that sooner. The peaceful look on May’s face as she slipped away confirmed that hospice was indeed, the best decision I ever made.