Iwo Jima: a Lesson of Ideals and Sacrifice 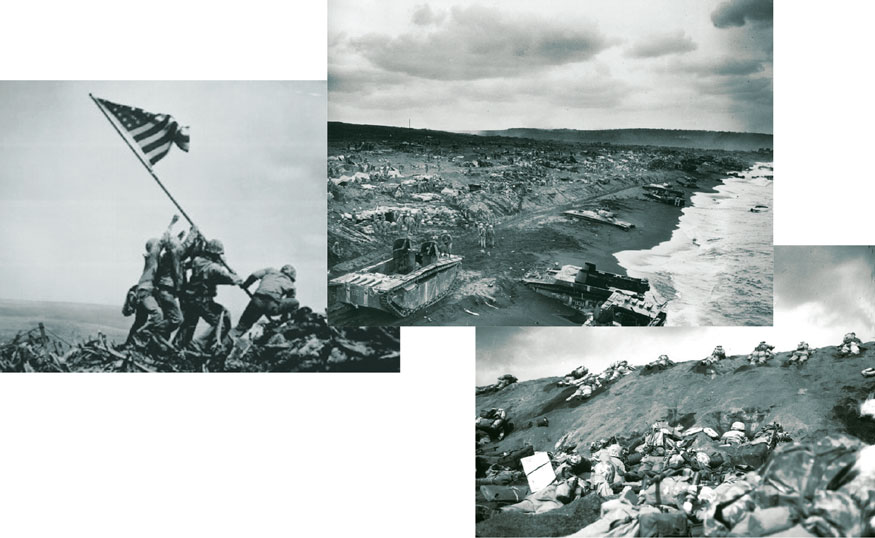 Japanese troops hid within caves in the island of Iwo Jima. U.S. troops had nowhere to hide. 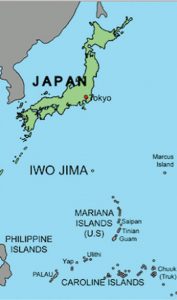 Ten years ago, I began offering high schools and and community groups on Maui a presentation on the Battle of Iwo Jima. I was only 9 in 1945, when my favorite uncle, Jimmy Shanahan, landed with the 5th Marine Division on Iwo Jima. My job was to write him two letters every week. He was wounded in the invasion and lived to tell about it. Recovered from his injuries, he was at sea headed for the Japanese mainland when the war ended. 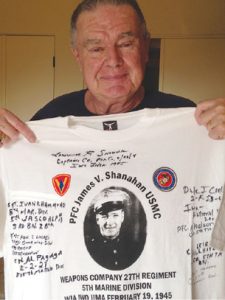 After Uncle Jimmy died, I received his Purple Heart medal. I knew nothing about Iwo Jima, because he never talked much about it, but I wanted to honor him by burying his award on that island. In 2008 and 2010 I was very fortunate to attend the Reunion of Honor on Iwo Jima with Iwo veterans and other family members.

The U.S. returned the island of Iwo Jima to Japan in1986 and now Iwo veterans and their families may visit only one day a year. Today, only 500 of the 70,000 marines who fought in this battle are living.

I studied all I could find about the battle and my utter ignorance of the details caused me to wonder… If old guys like me know so little, then how much could younger generations know?

When I learned how critical Iwo Jima was to winning the war in the Pacific, I began speaking about ideals and sacrifice — the extreme sacrifices made for the great ideal of living in freedom.

First, we all owe a tremendous debt to The Greatest Generation. When young people today see older veterans marching in parades, they don’t realize that all wars are fought by youths  right out of high school. They also may not realize that for every old soldier, there are many young men who never came home.

The second lesson of WWII is to watch out, because history repeats itself. We need to diligently avoid another world war. I explain that young kamikaze suicide bombers were following an extreme ideology of death taught by their spiritual and military leaders. It doesn’t take students long to figure out that young Islamic terrorist suicide bombers today are doing the same thing, encouraged by their spiritual and military leaders. When I speak to an audience, I give them a brief oral quiz — just three questions: 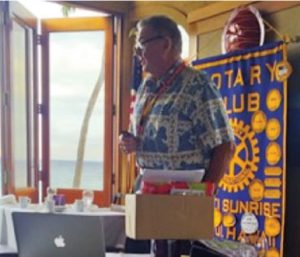 Talks at Rotary clubs and local schools help keep knowledge alive in the hope that our children will avoid another world war.

1. Have you seen the famous flag-raising photo? They all have.

The tiny island of Iwo Jima (now Iwo To) sits halfway between Japan and the Marianas Islands. When the U.S. liberated the Marianas from Japan in the summer of 1944, the Japanese homeland came within range of the B-29 Super Fortress bomber; our fighter planes could only fly half that distance. Iwo Jima became instantly strategic to both the U.S. and Japan. Both sides went “all-in” to control this five-square-mile “sulfur island” and its 550-foot volcanic vent, “Mount Suribachi.”

The battle of Iwo Jima was like no other in history. Japanese forces defended the island from caves within it. Beginning in 1943, Lt. Gen.Tadamichi Kuribayashi turned Iwo Jima into an impenetrable underground fortress — 17 miles of tunnels connecting 1,500 pillboxes, gun emplacements, living quarters and a hospital. Aerial and naval bombing for 73 days never penetrated the stronghold. U.S. Marines landed under cover of artillery fire from battleships, but there was no place to hide or dig in. Casualties mounted to 5,000 after just four days.

The famous flag raising took place on day five, but the battle would rage for another month, claiming the lives of almost 7,000 Marines and wounding another 21,000. Of the 22,000 Japanese troops on the island, 21,800 died. The Marines never saw most the enemy troops they killed.

In March, with the battle still raging, the first P-51 fighters were stationed on Iwo. Two nights later, 350 B-29s fire-bombed Tokyo, destroying 17 square miles of the city and killing more than 100,000 — a greater loss than from either atom bomb. From March until the end of the war, 2,500 B-29’s made emergency landings on Iwo Jima, saving the lives of 27,000 U.S. Air Force personnel. There were 81 Congressional Medals of Honor awarded in the Pacific theater; 27 were awarded on Iwo Jima.

At 81, I have honored Uncle Jimmy through the years by helping to educate Maui school kids and their parents about the sacrifices made at Iwo Jima — so we can all live in freedom.