I went to law school because math wasn’t my strength and I liked to argue (just ask my wife on both accounts). In considering my dislike of figures, it’s ironic that I am often asked to summarize my work in numbers.

I have been with the Prosecutor’s Office now for over 22 years, and 10 years ago created the Elder Abuse Unit. This unit was the first (and still is the only) team in Hawai‘i dedicated to prosecuting felony offenses where the victims were 60 years of age or older. At the beginning of it all, there was only one attorney (me) and one staff member. Over the years, however, we have grown to four attorneys, two staff, one paralegal, and two student interns (in total we have had 32 volunteer student interns over the years).

The cases we handle include everything from property crimes like burglary and auto thefts to sex assaults (there is a rape trial going on right now as I write this article) to violent crimes, including murder. In most cases — whether referred to us by Adult Protective Services or received directly — people do not want to get the police involved. National studies show that only 1 in 25 elder abuse cases are reported to the police. 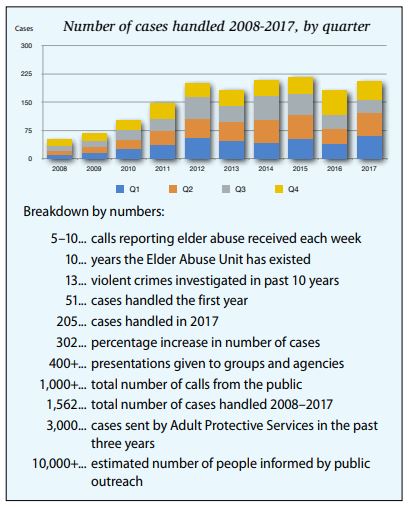 One thing I wanted the Elder Abuse Unit to be was a resource for educating the public about elder abuse and providing information about preventing one from being a victim of this crime. Besides giving free presentations and trainings to various groups and agencies, our unit has had an information booth at The Good Life Expo (Hawai‘i Seniors’ Fair) for the past nine years. Attendance at that event ranges from 20,000 to 26,000 people each year.

Lastly, I have written 28 articles about elder abuse for Generations Magazine over the years (all issues can be found on this website). Now it is 29 articles.

CORRECTION TO CHART: The Elder Abuse Unit prosecuted over 500 violent crimes, 13 of which were murders.