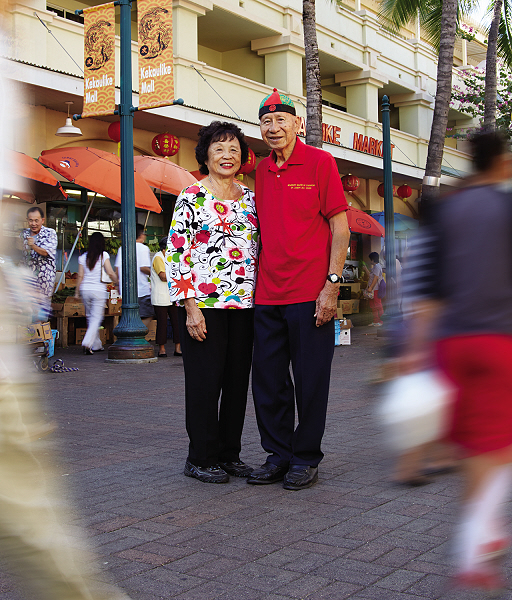 “So lucky that we live in Hawai‘i and get to celebrate New Year twice!” says Dr. Joe Young. On Feb. 13 and 14, fireworks, lion dancing, cultural performances and a huge parade will usher in the “Year of the Sheep” 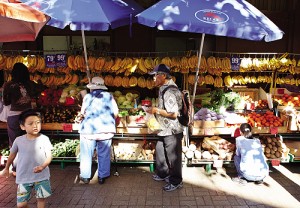 As a part of Honolulu’s downtown economy, Chinatown has overcome many challenges. Chinatown’s Mayor is a liaison to City and County programs and services. We were humbled to spend time with him and learn about his early life, his road to a successful career, his vision for Chinatown’s future and his 26 years of service to the Chinatown community.

in Zhongshan city of Guandong Province ( 廣東 省中山市 ), China, where Sun Yat-sen was born. Joe’s father sustained his family by farming mullet in Kuapa fishpond at Hawai’i Kai. To prosper, he learned fluent Hawaiian. “My father told me that to be successful, I must learn to communicate —so that’s what I did, ”aid Dr. Joe. It paid off for both father and son. 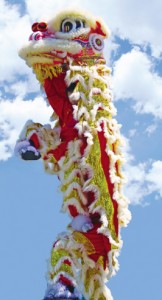 Language has shaped Honolulu’s Chinese community for almost two centuries. Dr. Joe explained that Chinese has thousands of “dialects.” Chinese written characters are universal, but the words associated with them are unique to each community. In English, “accents” don’t interfere with understanding, but Chinese dialects differ so much that people from one village cannot understand their neighbors across the river or over the mountain. It’s not surprising that people of one dialect stick together, and that China’s government teaches Mandarin dialect to all school children to unite their country. As far back as 1810, a few Chinese came to Hawai‘i from Zhongshan (near Hong Kong and Macao). Later, in the 1850s large numbers of Cantonese immigrated to work the sugar plantations. People from the See-Yup district ended up in San Francisco and New York, where their own dialects became established. Today, Chinese from Vietnam, Laos and Cambodia speak their own dialects, and socialize in their own clubs in Chinatown. In addition to these language groups, 100 societies also form around interests like commerce, lion dancing, exercise and religion. Building a lar
ge community always requires
bringing people together — Dr. Joe’s success is his ability to overcome Chinese language barriers. 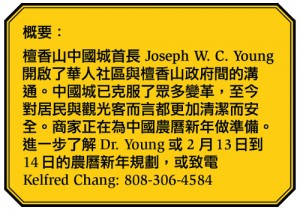 GM: Dr. Joe, Mayor Kirk Caldwell appointed you “Mayor of Chinatown.” What does that mean?

JY: Well, it is an honorary role, like a diplomat or Miss America,” Dr. Joe says with a grin. “My first duty is public relations — to keep Chinatown in the public eye. But more than that, I help Mayor Caldwell and the City Council communicate with our 100 cultural, community organizations. We are very social, and families are large. Some community issues are very big — solutions require all of us to get together and decide what is best. When the city or county needs our help on a project, my job is to get people communicating. Right now we are working with the Mayor on finding options for the homeless, and supporting Chinatown merchants.

GM: Chinatown looks a lot cleaner in the past few years. It is a safe place? 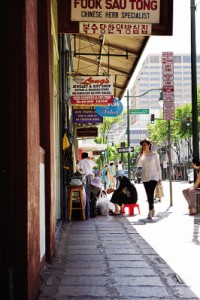 The appeal of Chinatown is quaint small shops with friendly merchants — selling everything from fine art and exotic delicacies to fresh seafood and local produce. Into the bargain, shoppers and visitors experience Chinese cultural traditions preserved in Honolulu for 200 years.

JY: I’m glad you noticed our new buildings and sidewalks. We have a lot of foot traffic in our small business district, and with the help of the City of Honolulu, we have been able to clean up it up. People can see and smell the difference. Chinatown is safe, day and night. We want people to know that we are a safe neighborhood.

GM: What can people expect at Chinese New Year?

JY: February 19th is Chinese New Year — the year of the sheep on our lunar calendar. The City and
County of Honolulu and United Chinese Society have been celebrating with cultural performances. The Chinese Chamber of Commerce and the City and County present a Chinatown open house Friday night, Feb. 13, and people will visit their societies and wish everyone good luck. On Saturday, Feb. 14, a big Parade with over 90 marching units starts in the afternoon. Maunakea Street will be closed from King Street, makai to Beretania Street. Vendors will set up booths on both sides of the street. Our County Council dignitaries, Mayor Caldwell and the 2015 Narcissus and Miss Chinatown Queens and their courts will be there with many traditional lion dancers 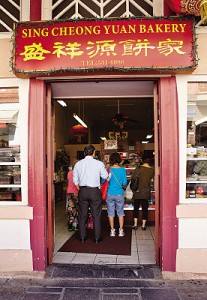 sweet rice balls stuffed with sweet bean, meat or lotus paste and deep-fried. Everyone makes their own versions. My family loves Nien Gao

, rice pudding with a red Chinese date on the top, and Pak Tong Koh 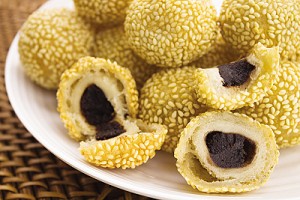 GM: Chinatown seems to be a great place to shop for fresh produce. 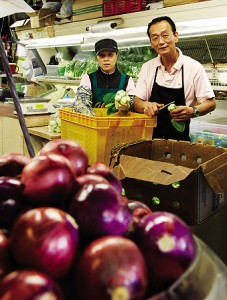 JY: Yes. You can find delicacies like Peking duck,pastries, sweets, flowers, fresh seafood, plenty bananas, and citrus fruits like tangerines. Food shopping is a social event. If you live in Chinatown or nearby, you see the same faces every day, and hear good conversation too. We buy a little at a time and enjoy the walking and talking. Most of the fresh produce is from local farms. My family farmed fish in Kuapa Pond and sold to shops up here

GM: Tell us more about your youth. How did you get to be a dentist?

JY: My uncle sent me to St Louis School. I was 16 when Pearl Harbor was bombed. Hysteria broke out. Soldiers came to the fishpond looking for spies — thinking we were Japanese. They barb wired the beaches, so our farmed fish nearly double in price. I quit school and went to work as an airplane mechanic’s apprentice at Hickam Air Force Base. Later I joined the Army Air Corps and served in the Philippines. After the war I passed my GED and entered University of Hawai‘i at Manoa. Later transferred to Washington University in Missouri, because they had a good school of dentistry. In 1955 I came home to set up a practice, and met and married Barbara Chun. She went to Syracuse University and completed her bachelors in education at the UH.

How did I get into dentistry? My college counselor tested my aptitudes. I wanted to be a lawyer but he said I would be better in biology — perhaps dentistry. He was right. I was good working with my hands and I did pretty well at dentistry.

GM: When did you retire?

JY: I’m 89 years old. I retired in 1994. My two sons, Emory and Collyer studied dentistry and took over my practice on Waialae Avenue. I also have two daughters — Haven is a teacher, and Shelby a veterinarian. For 26 years now Barbara and I spend our time giving back to the community. We have a Chinese adage that says, “When you drink water, remember the source.”

When you receive something valuable, give back. You know I also studied sociology in college — I always had that drive to help people. Dentistry helps people too.

Some of Dr. Young’s Accolades:

Some of Dr. Joe’s Favorite Projects: 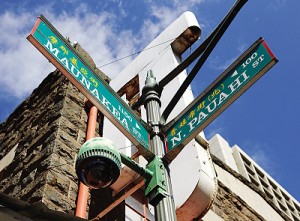 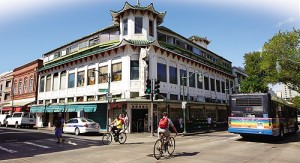 GM: What’s in the Future for Chinatown?

JY: The City Council applied Bill #48 “sit and lie law” to Chinatown in December. Our sidewalks are narrow. One person sitting on the curb disturbs foot traffic that our shop owners rely on for their livelihood. Enforcing the ordinance is a perfect example of how city and community work together. Shopkeepers and shoppers are pleased with the improvement.

The Mayor wants to help our community to grow. The Honolulu Rail Transit Project includes a Chinatown Station at the corner of Kekaulike Street and Nimitz Highway. We have a new Chinese Marketplace just two blocks away on Kekaulike. When the train begins running, we expect more foot traffic.

We are a community of different philosophies and backgrounds. New and different ideas are good. We want to be the best Chinatown we can. We started with safety and cleanliness. As honorary Mayor, I keep us communicating so Mayor Caldwell and the County Council can continue to help us. Then everyone prospers.

On behalf of my family and the community of Chinatown, I wish everyone Gong Hey Fat Choy

! Welcome the New Year! Come and celebrate with us! 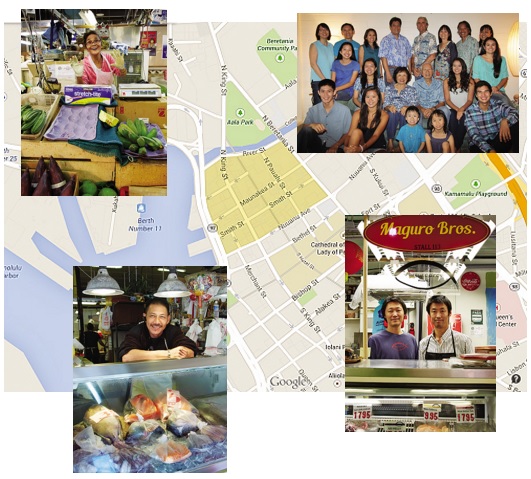