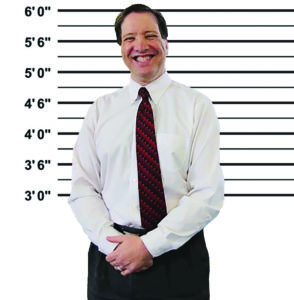 I recently received a telephone call from my mother. Given that I was in a meeting, I didn’t answer it, but instead let it go to voicemail. Almost immediately, the phone started buzzing again from her same number. Usually, my mom would just leave a message, so this second call was very unusual.

I excused myself from the  meeting and answered the call. Mom immediately asked, “Scott, are you in jail?”

It took me a second to comprehend what she was asking me and another second to understand what was going on. My parents were being set up for a scam.

While my mother was out playing mahjong, my dad’s caregiver had answered my parents’ home phone and was informed that their child had been arrested. Even though I have a brother and two sisters, it was assumed the child who was incarcerated was me — the one who has worked at the Prosecutor’s Office for 25 years!

My mother came home from her game to find my father in a panic and a caregiver who was now viewing my folks in a different light. But I was very relieved that my mother had the forethought to call me first before contacting the “police” to arrange to post my bail.

Once I explained that this was a common scam, very similar to the Grandma Scam, in which a person is told that a loved one is in trouble and immediate financial help is necessary to avoid harm befalling them, my mother and father realized I did not suddenly turn to a life of crime.

I called the phone number with the New York area code, but no one answered.

A lot of the scams that are brought to the attention of the Elder Abuse Unit involve victims giving money when they are in a high emotional state. These strong feelings can be joy (as in “winning” the lottery and needing to pay taxes and fees first before collecting your “prize”), fear (a message saying a loved one is in need and money will fix the problem) or sorrow (help these poor people who are experiencing the trauma of a natural disaster).

Whatever the angle that is pitched, please don’t make financial decisions when your emotions are running high! You could be setting yourself up as the target of a costly scam.