The Many Facets of Dementia

Alzheimer’s Disease and dementia — isn’t that the same thing? The simple answer is no.

Dementia is an umbrella term for the different types of diseases that affect the brain. Alzheimer’s Disease is only one form of dementia.
Also on the list we have Lewy body dementia, alcohol-related dementia, frontal-temporal dementia, Parkinson’s-related dementia, and so on.

Dementia is ultimately brain failure. Like other organ failures, you can expect the brain to gradually regress over time, and some diseases progress faster than others. This gradual decline of cognitive function is the main culprit behind the many, and sometimes violent, behavioral changes that accompany this disease.

Teepa Snow (www.teepasnow.com), one of my mentors, has transformed the way we think about dementia with her Positive Approach® to Care philosophy. As a registered occupational therapist with over 30 years of hands-on experience, Teepa has reinvented the varying stages of dementia by introducing her GEMS® model (Sapphire, Diamond, Emerald, Amber, Ruby and Pearl). Each GEMS state reflects a different stage of dementia with an emphasis on what the person is still able to do rather than what cognitive functions are lost. Nevertheless, as a person living with dementia goes through the GEMS cycle, behaviors remain problematic.

Dementia attacks the left side of the brain more aggressively than the right. The left hemisphere is where we hold language capabilities — comprehension, vocabulary and speech production. When we have limited language skills, we unconsciously rely on behaviors to communicate. 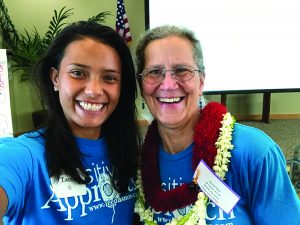 Author Mapuana Taamu with her mentor Teepa Snow, founder of the Positive Approach® to Care philosophy.

Think about 3-year-olds. Do they tell you that they are tired and need a nap, or do they kick, scream and throw a tantrum? This is how people living with dementia communicate. With diminished language skills, they have difficulty verbalizing what they want or need, so they end up showing you through their behaviors.

It takes a lot of detective work to understand these behaviors! Ultimately, it is the duty of their caregiver to adjust and adapt to the ever-changing brain. To give care successfully requires lots of patience paired with trials and numerous errors. But as time goes by, the “uh-oh’s” will eventually turn into “ah-ha’s!”

Mapuana Taamu is a professional, family caregiver specializing in dementia. She owns and operates Memory Friends, a companionship, respite and consultation service for seniors. She also is a “Certified Positive Approach® to Care” Trainer. Reach her at:  808-469-5330  |  mfriends808@gmail.com