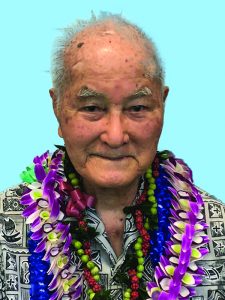 Born in October 1918 in Kapa‘a, Hidenobu Hiyane remembers growing up on Kaua‘i and graduating from McKinley High School in 1937. He served with the 100th Battalion as a radio operator, and was very lucky while serving in Europe and France: An officer using the radio was shot in the head and killed while standing next to him, and a mortar shell that fell next to him didn’t explode.

Hidenobu remembers going to Chicago on the GI Bill to learn more about the radio at a technical school. While there, he met and married a Waipahu woman, both returning home to be with her dying mother. Two daughters were born in Hawai‘i, and he has three grandsons living in California. Hidenobu worked for the Army as an Electronic Maintenance/Radio Operator for 30 years and repaired donated electrical items at the Salvation Army for 12.

Besides being very lucky, he does not take any medication nor wear glasses. He said that for many years he has cut and blended aloe leaves with water and drinks it every day. He also eats leaves from a moringa tree in a variety of dishes.

To keep his mind sharp, Hidenobu does Word Search puzzles and listens on his ham radio, deciphering Morse code from all over the world. His memory amazes me, as he said he left the Army on April 13, 1945, the day after Franklin D. Roosevelt died.