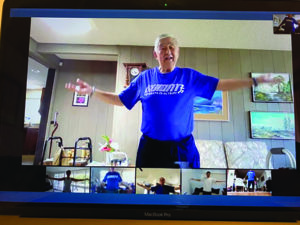 Joe Kuroda (93) and Henry Lee (90) are active participants giving younger veterans aged 65 to 88 a purpose. In addition to being a former state Senator, Joe also served in World War II in the US Army, rising to the rank of colonel. Harold is a retired command sergeant major who served in three conflicts. Both lead by example, motivating those decades younger than them in exercising and the importance of a healthy lifestyle. To join Gerofit, you must be referred by a VA doctor. 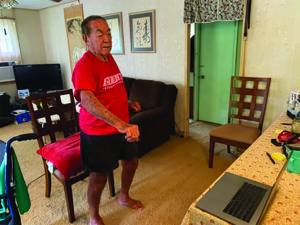 Classes are limited to seven per group, allowing the therapist/instructor to closely monitor the progress of each veteran. Currently there are six active groups. It was a challenge initially to convert to telehealth, but veterans eventually connected through iPads, tablets and personal computers and the program grew.

When it is deemed safe to reopen the CLC, everyone is looking forward to returning for the comradery and potluck kaukau!