Dr. Thomas Kane: A Lifetime Commitment to Bringing Hope and Help to People with Arthritis

Dr. Thomas J. Kane, III, is the founder and chief orthopedic director of the Kane Orthopedic Institute. He has been selected as the Hawai‘i Arthritis Foundation Medical Honoree for 2013 based on his exceptional contribution to the treatment and care of people with arthritis across the state.

Dr. Kane has been voted Best Doctor in Hawai‘i and the USA since 1996, has been recognized as an “Outstanding Teacher” at the University of Hawai‘i, and regularly gives back to the community through volunteer service with organizations like Shriner’s Hospital and Operation Walk, an international orthopedic group that travels to foreign countries to deliver care to those in need.

Dr. Thomas Kane describes himself as a kid from a small town in central California who spent afternoons riding his bike around the neighborhood and playing with his dog. He comes from a close-knit family, and counts his 95-year-old mother, Kay, a self-taught book keeper who still walks to work six days a week, as the greatest influence in his life. “Mom is the picture of health. She can bend over and touch her toes, takes no medications and hates doctors — although she makes an exception for me.” He credits her with teaching him the importance of a holistic perspective on life and health, something the 61-year-old surfer has taken to heart. Dr. Kane, who is known for his bedside manner and the time he takes to talk with patients about how to live well despite ailments and injuries, really does practice what he preaches. At least three times a week, you can find him on his board out at Rockpiles, Ala Moana Bowls or Laniakea, not only getting in a valuable workout but also having fun, which he says is vital when you are looking for a way to stay active. “If it’s not fun, you’re not going to do it.” He also regularly lifts weights and does stretching exercises, eats a balanced diet that includes “a little bit of everything, but not too much of anything,” plus a multivitamin, and of course glucosamine and MSM supplements to promote joint health. 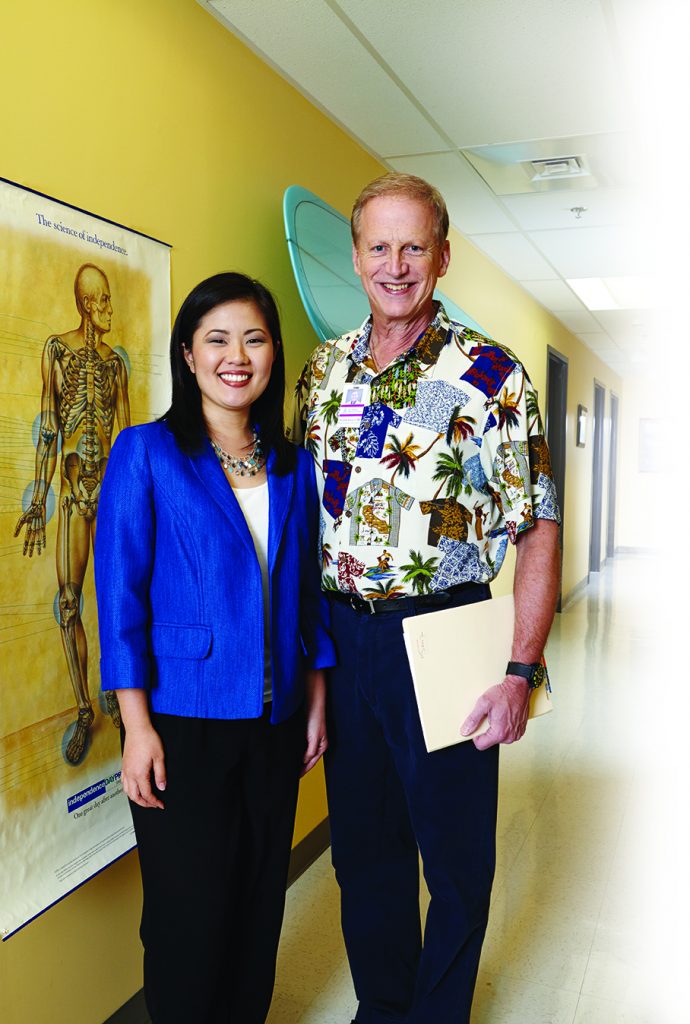 Dr. Thomas Kane is pictured with Jennifer Hee, Executive Director of the Arthritis Foundation, Pacific Region. Dr. Kane was selected as the Foundation’s Medical Honoree because of his exceptional track record providing education and care to people with arthritis.

Another lesson that Kay Kane imparted to her son is the importance of discipline and hard work. Dr. Kane tells the story of how his mother enrolled him in piano lessons at the age of four, and expected him to practice every day. “She would sit there on the couch next to the piano and make sure I played for 30 minutes. She wasn’t mean about it, but I knew that I had to do it.” The practice paid off, for by the time he was 18, he had won several piano competitions and even garnered a full scholarship to the prestigious Julliard School in New York City. “I knew I had reached a fork in the road,” he said. “I could either pursue a career as a professional musician or go see what else the world had to offer.” Ultimately, he turned down the scholarship to Julliard, and enrolled in the University of Santa Clara. Halfway through college, he realized that he needed to make a switch from his humanities major to pre-med. His advisor told him that it couldn’t be done because he would never have time to complete all the prerequisite coursework to qualify for medical school. Not surprisingly, he proved his advisor wrong, graduated magna cum laude, and went on to medical school at UC Davis and residencies in general and orthopedic surgery at the University of Hawai‘i. He was also the first physician in Hawai‘i to complete a fellowship in adult hip and knee reconstruction. The work ethic taught to him as a young boy was what had kept him going. “Mom told me, ‘You have to find your passion and commit to it one hundred percent.’ I knew I wanted to be a doctor.”

Today, Dr. Kane has been serving the people of Hawai‘i for more than 30 years, performing over 9,000 surgeries with a 98% surgical success rate. The procedures he does are aimed at both joint preservation and joint reconstruction, in keeping with his overall philosophy that “we try to help patients keep their God-given parts as long as possible.” While surgery is considered a last resort, it can offer patients a dramatic improvement in quality of life when their pain is too great and their mobility or daily functioning is at stake.

According to Dr. Kane, there is a reason why his specialty is necessary. “The problem is that humans outlive their joints. Joints are made of cartilage, which unfortunately cannot regenerate itself and does not heal on its own if it is injured. Generally, the more you use a joint, the more it wears out, and this natural progression is compounded by diseases like arthritis.” The majority of patients who come to him are suffering from arthritis, the most common form being osteoarthritis, so much of the education that he provides to his patients is about how to prevent arthritis and keep joints healthy or how to manage symptoms in order to delay surgery as long as possible. He also refers many of his patients to the Arthritis Foundation because “they have fabulous resources for those who want to educate themselves.” 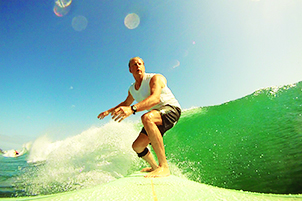 Whether you have arthritis or not, moving is the best form of medicine. Dr. Kane likes to stay active by surfing at least three times a week.

Dr. Kane shares the following tips with his patients about joint health:

Dr. Kane shares that one of the most important parts of his practice is the initial consultation he has with each person who walks through his doors. This is the time when he can really sit down, talk story, and listen to his patients. His goal is to understand what their needs are but also to set people at ease, especially those who are in pain and might be starting to feel discouraged. I tell them, “The decision to have surgery is a difficult one, but do not lose hope. There are many very effective nonsurgical treatments for arthritis today, including medications and other modalities. If surgery is indicated, the options we have are highly successful. There is greater than 95% chance of restoring their quality of life, and reopening doors that they see closing.”

It is this optimism and confidence that makes Dr. Kane one of Hawai‘i’s most beloved and effective physicians. A small-town boy who had a simple wish when he started down the path to becoming a doctor: “I wanted to help patients get better. I wanted to give people their lives back.” Thousands of seniors in Hawai‘i would agree that he has done just that.

Tips from the Arthritis Foundation: Signs and Symptoms of Arthritis

Did you know that 50 million people — or one in five Americans — have been diagnosed with arthritis? Arthritis affects men, women, and children of all ages, and it is the nation’s most common cause of disability.

There are several warning signs to watch out for, if you think you have arthritis:

You should see your doctor if you have any of these symptoms for more than two weeks. Early diagnosis and treatment of arthritis is important because it can slow or prevent the joint damage that often occurs during the first few years of having the disease.

Tips from the Arthritis Foundation: Manage and Prevent Arthritis

Be physically active. Physical activity can help manage the pain and stiffness from many forms of arthritis. Exercise keeps your joints moving, keeps the muscles around your joints strong, and keeps bone and cartilage tissue strong and healthy to prevent arthritis. Whether you are starting your own routine or want to join a program, there are many options for you to choose from:

Control your weight. Weight control means staying close to your recommended weight or losing weight if you are overweight now. Did you know that weight control helps to:

Protect your joints. Whether you are working out or working in the yard or just looking for a way to be kind to your hard-working joints, it is important to minimize the trauma they experience. Use these tips to help your joints feel better or to stop joint pain before it starts: 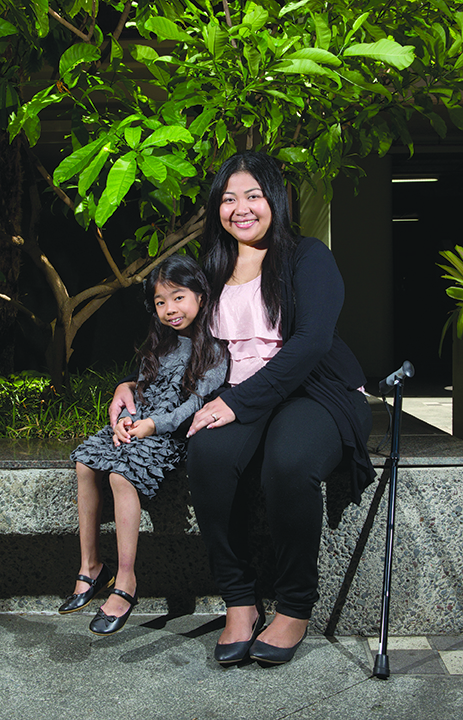 As arthritis advocates, Shaley and Sharon Yoshizu share their story to help people understand the impact of their debilitating disease, and that it can affect anyone at any age.

A common myth about arthritis is that it is a disease that only affects older people. In fact, two-thirds of people with arthritis are under the age of 65, and it is estimated that there are 300,000 children living in the US with a form of juvenile arthritis. Sharon and Shaley Yoshizu know first-hand about the lifelong challenges that people face when they are diagnosed with arthritis at a young age.

Sharon, age 30, is a mom of three who was diagnosed with rheumatoid arthritis nine years ago. Her daughter Shaley, now nine years old, was diagnosed at the age of 2 with polyarticular juvenile rheumatoid arthritis. While both mother and daughter now deal with the frequent and disabling joint pain that arthritis brings, as well as all of the doctors’ appointments, injections and medications that help to keep their symptoms under control, they are tireless in their efforts to raise awareness about arthritis and share their message of hope that there will someday be a cure for this common affliction.

If you would like to join Sharon and Shaley and the Yoshizu family in the fight against
arthritis, consider participating in this year’s Arthritis Walk. The family- and pet-friendly event will be held on Sunday, May 5 at Kakaako Waterfront Park. Funds raised through the Arthritis Walk will support national research initiatives on the treatment and cure of arthritis, local state-wide exercise programs for people with arthritis, and education and support for people with all forms of arthritis and their families. 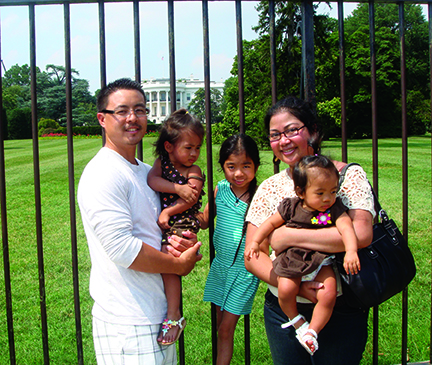 Even though they deal with the constant pain of living with arthritis, the Yoshizu family works tirelessly to raise awareness and hope for a cure. The Yoshizus serve as Hawai‘i Arthritis Foundation ambassadors, and represented Hawai‘i at the 2011 National Arthritis Advocacy Conference in Washington, DC.

Tips from the Arthritis Foundation: Types of Arthritis

According to the Arthritis Foundation, there are more than 100 types of arthritis and related conditions. The following are three of the most common diseases that make up arthritis: