Before Retiring, Prepare with an ‘Exit Plan’

When my husband told me in early 2019 that he wanted to retire, my first reaction was, “No, you’re still young and can work until you’re 70.” When we had a serious conversation a few months later, I agreed with his desire to retire, but said, “You need to have an exit plan because I have a home office and don’t want to see you sitting on the couch watching TV.”

Help a Loved One with Social Security

by Jane Yamamoto-Burigsay, Social Security Public Affairs Specialist in Hawai‘i According to the U.S. Census Bureau, there are nearly 57 million people living with disabilities. Thirty percent of America’s adults help provide care for a sick or disabled family member....

Retired & Senior Volunteers Give Back…

The Retired & Senior Volunteer Program (RSVP), one of the largest senior volunteer networks in the U.S., is one of three Senior Corps programs funded by the Corporation for National and Community Service, a federal agency that supports service and volunteering.

Living in a Community of Caring

Ever think about growing old? Even when we become caregivers for aging loved ones, or start to feel pain in our joints, or experience the “where did I leave my keys?” and “what was I gonna say?” moments, we may still not attribute them to aging.

Most seniors I meet say they prefer to age in place and live at home for as long as they can. Who wouldn’t want that, right? But living out your life safely at home may require a bit of help and experience. Home healthcare is particularly suited here; clients can manage their care with medical professionals to help make safer and more informed decisions.

Are Your Affairs in Order?

Does someone know where you keep your important documents? Do your loved ones know what your last wishes are should something happen to you? Do you know what to do when a loved one is faced with an emergency?

A New Cave for the Hawai‘i Men’s Shed

Back in late 2015 at a Rotary club meeting, I learned about the “men’s shed” program. To me, that term conjured up an image of an old workshop or storage building next to a residence. I was corrected by a fellow Rotarian who described the Men’s Shed as a club made up of senior men drawn by fellowship, and the desire to work on personal and group projects.

In the last issue, I covered the lessons my mother-in-law, “Mary,” taught me through her encounters with various scam artists she has met over the years. Unfortunately, those incidents were only the tip of the iceberg.

Reflecting on What is Important

I had been preparing to write about the importance of conversation in estate planning while watching a documentary on HBO called Cries From Syria. In the midst of this heart-wrenching story about the Syrian situation—a girl, who could not have been older than 8 or 9—facing death from starvation and preparing her will. It had nothing to do with money.

According to the Family Wealth Checkup study by Ameriprise Financial, there’s a correlation between financial confidence and communication. While many families are discussing financial issues, they tend to shy away from topics like inheritance and estate planning, leaving some with unrealistic expectations.

The Aloha State: A Model for Kūpuna Care

Never in the history of humankind have so many people lived so long. Anthropologists estimate that on average, Neanderthals lived little more than 20 years; only a small percent reached 40. In 15th century Europe, the average life expectancy reached a scant 35 years. Around the turn of the 20th century, however, advances in public health (clean water, waste disposal, vaccinations) decreased infectious diseases, greatly reducing infant and child mortality and increasing life expectancy.

The app allows users the flexibility of disclosing information they deem relevant and this data is not shared with other applications. First responders and others who may want to help in an emergency situation can access your Medical ID…

Since 1979, Hawaii Meals on Wheels has been serving hot meals to the ku¯puna in need in our communities. The program started as a small committee formed by former State of Hawai‘i librarian Irmgard Hörmann and the Social Ministries Committee of the Lutheran Church of Honolulu. Over time, the organization grew as it sought to provide basic nutritional and human support to seniors who are unable to fully care for themselves. What started as two routes manned by six volunteers is now a collaborative effort involving 450 volunteers and over 50 routes that served more than 97,000 meals in 2016.

Many of these supporters dutifully provide care without complaint. Yet, demands may start to take a toll and their own health may be compromised.t’s estimated there are more than 150,000 unpaid family caregivers in Hawai‘i. These valuable helpers are typically women in their early 60s who are caring for their husbands or elderly parents while still working. And that doesn’t take into account those who may occasionally care for their grandchildren, as well.

The City and County of Honolulu offers a real property tax credit to property owners who meet certain eligibility requirements. If you qualify, you are entitled to a tax credit equal to the amount of taxes owed for the current tax year that exceed 3 percent of the titleholders’ combined gross income.

It’s Never Too Late to Learn

Henry Ford once said, “Anyone who stops learning is old, whether at 20 or 80; anyone who keeps learning stays young.”

Na Kupuna is a program that provides seniors an opportunity to do just that. As a part of the University of Hawaii’s Student Equity Excellence Diversity (SEED) initiative, Na Kupuna opens up college courses to seniors age 60 and older, which they can attend for free. About 650 senior citizens take advantage of this program every semester!

Maximizing Mobility as We Age

by Julie Moon, Physical Therapist HEALTH As we age, we lose flexibility, strength and balance, which affects our general health and mobility. The good news is therapeutic exercise can help improve mobility and function. Balance, flexibility and strength are essential...

by James Carter, L.Ac.  More than one in four Americans suffer from a chronic pain condition. Pain is not only physically debilitating, but also affects our emotional and mental health. The primary causes of chronic pain are injuries, inflammation, poor circulation...

by Generations Magazine Staff Hospice Hawaii Lāna’i is celebrating the one-year anniversary of Hope House, a home-away-from-home for many patients and their families. “We’re so excited to celebrate this milestone with our friends at Hospice Hawaii Lānai,” said...

A new law takes effect on July 1 that will make it a bit easier for caregivers when some-one is admitted or discharged from the hospital. The Caregiver Advise, Record, Enable (CARE) Act gives family caregivers three basic rights that will help with admission, discharge and care of a loved one as they transition back home.

by Katherine Kama‘ema‘e Smith cover & feature photography by Brian Suda The traditions and language of the original Japanese immigrants to Hawai‘i in the late 1800s survived because they taught their children to venerate and value the culture of the homeland. In...

The Best is Yet to Be

On a frosty winter’s morning, my fellow
seminarian, Cal Chinen, picked me up in
his old beige Volvo. We drove across the
Columbia River from Portland, Oregon, to Washougal,
a small town at the foothills of the Cascade
Mountains in Washington State. We were responding
to a senior citizen’s request to do some yardwork. 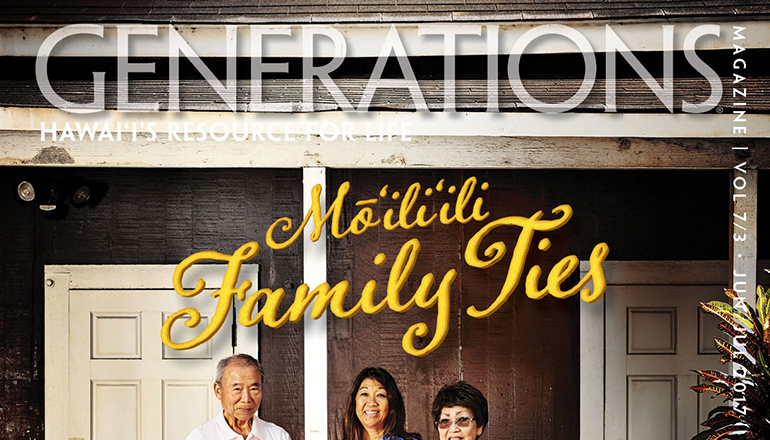